Necropoli – I (Self Released) 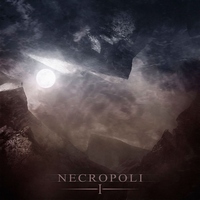 If death and black metal can begin the journey in the realms of space, who says that doom metal cannot follow?  A calculated and trudging adventure into the eerie confines of space, Necropoli’s debut album I is a true fusion of different elements to create an excellent and futuristic release that has an identity all to itself.

Five burly tracks that weigh in at almost an hour, Necropoli are excellently paced songwriters of their craft.  While much of the doom metal genre is content to plod along on their funeral dirge to death, Necropoli distance themselves from the pack with their additional influences.  Using a “toss in everything but the kitchen sink” approach yet maintaining song structure and flow, you can find elements of industrial, death metal, and eerie ambient soundacapes to give additional nuance to their sound.  These added dynamics give the music some much needed breathing room, never having to rely on the constant trudging of doom, but being able to toss in an occasional frenzy (“Inner Space”) or creepy synthetic layer (“A Step”) to change things up from time to time.

Also bringing along some surprisingly catchy melodies along for the ride, I balances a number of different worlds.  The vocals bring a bellowing cosmic roar that may provide a constant, but suitably fit the barren and strange landscape.  This changes later in the album, and closing “Curriculum Vitae” is masterfully creepy in its atmosphere and vocal alterations.

To manage the doom metal terrain in such a unique way for a first timer such as Necropoli is deserving of some high praise.  A number of bands that have been playing for much longer still have yet to be as creative and playful with the doom sound as Necropoli have done here.  Innovative stuff, and with it, a band that is almost certain to find a home with a label very soon!