Necromancing the Stone – Jewel of the Vile (Metal Blade Records) 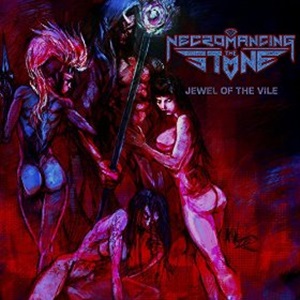 Anyone familiar with the Kathleen Turner/Michael Douglas 80’s action-adventure comedy movies Romancing the Stone as well as the follow up Jewel of the Nile will get the irony of this heavy metal act’s namesake and debut album title. Another swivel of attention occurs in the lineup – involving Arsis guitarist James Malone, ex-The Black Dahlia Murder bassist Bart Williams, The Absence drummer Jeramie Kling and two Brimstone Coven guys for vocalist John Williams and Justin Wood (who switches his drum role for second guitar). Side projects can be a healthy outlet to pursue a common passion – and as such Jewel of the Vile hones in on a love of old school traditional metal with a melodic death/thrash bite, twin harmonies, and the added edge that probably comes from each musician’s main body of work.

Right out the gate, dual kicks and guitars run rampant as if Painkiller came back to life for “Crusher”, the song shifting seamlessly between Angel Witch-like atmosphere and heavier textures. Pure metal riffs and tasteful harmonization take “The Descent” into the netherworld, while the double bass thunder and speedy chugs plus technical axe fire push the follow up “The Siren’s Call” into highlight of the year material, John’s harmonizing in high register for the chorus solid steel stuff. “The Old One” gains a spirited shred quotient boost from guest lead player Jeff Loomis, putting the icing on an otherwise energetic anthem filled to the brim with heroic riffs and solid melodies that give off an Iron Maiden meets Saxon vibe. John gets the chance to reach the upper heights of his vocal range – another hallmark to a love of old NWOBHM (Kevin Heybourne most notably) meets say Paul Davidson of the underrated Heir Apparent on “Rotted Reunion”. James and Justin pile on the aggressive guitar harmonies and tricks for the darker, moody escapade “Honor Thy Prophet”, channeling a love of Carcass’ Heartwork as much as those 80’s influences that swirled about from childhood.

Although the cover art seems a little more ‘shock and awe’ oriented than necessary (ladies scantily clad)– it beats another computer graphics cut and paste maneuver, right? In sum, these 11 songs fire up the cannons and galvanize the troops for metal’s long-lasting legacy. Necromancing the Stone serves up a potent batch of energetic traditional metal with technical taste and power tempos, and hopefully will continue forward when time allows.