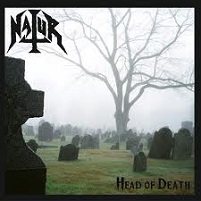 Self-branded as “old metal,” New York’s Natur unfortunately, leave themselves open to a lot of criticism by sounding just that: old. It’s not “old” as in sounding labored and unenergetic; it’s simply a matter that because they’re trying to play a style of metal before there were clear and defined classifications. That in itself, is old-school, and vintage, and retro, and everything else that reeks of regression. On their Head of Death debut, the quartet do a successful of job of hurdling back to a nostalgic era, but not much else.

Laid out and paced to be a part of a complete listening experience, Head of Death sounds longer than it really is, the result of a vast, but ordinary stockpile of ideas. While other vintage reclamation bands such as Pharaoh, Reverence, and Hour of 13 bristle with energy and careful consideration to metal’s past, Natur basically picks and chooses elements in a haphazard nature, and it shows on cuts like “The Messenger” and “Spider Baby.”

As the band does battle with Maiden melodies, Manowar power surges, and a cadre of NWOBM ideas, singer Weibust croaks out half-assed classic metal vocals that are ultimately, Head of Death’s primary downfall. Without the necessarily versatility and conviction to carry home his long-winded narratives, Weibust bogs down otherwise enjoyable cuts like the opening title track (his yelp of the song’s title is particularly annoying) and the closing “Mountains of Maine,” which would be a standout cut if the vocals didn’t wreck the entire composition.

Essentially another fly in the classic/traditional metal ointment, Natur’s mid-level take on this style shouldn’t warrant any additional attention for Head of Death. Even the staid and obvious album cover and logo come across as forced. Graveyards are so played-out.