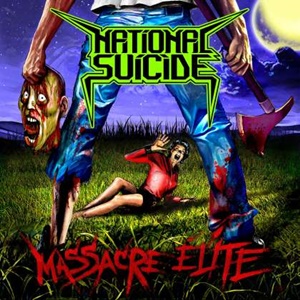 Things must be happening in threes for Italian thrash band National Suicide. Massacre Elite is the group’s third studio album – also putting former drummer Ema Revello back on his percussion throne for the third time in their decade plus history. Hot on the heels of last year’s Anotheround release, we get another full-bore, up-tempo set of tracks that appears to once again showcase pure passion for most things US/East Coast related in the genre, especially from the mid to late 1980’s. The quintet keeps the riffs sharp, the transitions quick hitting, and provide heaps of complimentary gang shouting backgrounds to get key phrases/choruses embedded deep in the cranium.

The train rolls like a juggernaut out of the station – the lead work flashy and shred-tastic, but not necessarily falling in line with the arrangement or main ideas on hand. Kerry King would beam at the opening divebomb work for the title track, although the main stair step riffs and subsequent shifts would pummel any discerning thrash follower to pieces. Three obvious reference points crop up when taking in the energy level, execution, and song construction for the nine songs – the tenacity of Overkill, the stronger than all crossover aspect of Nuclear Assault, and the occasional blitzkrieg mentality that made Destruction a premiere German act. The added sound effects of opening a can of beer make “Take Me to a Dive Bar” all the more seedy, as well as the over the top vocal delivery from Stefano Mini – this is a mid-tempo delight sure to go down a storm with all moshers.

When it comes to Stefano, it’s probably not the first (or final) time he’ll be compared to Bobby ‘Blitz’ of Overkill. His speedy word spew coupled with that obvious high-octane sneer fits National Suicide like a glove, equally adept at the more controlled fare such as “Pisshead” as well as the heart racing, speed fixated “Trouble Ahead”. And you might as well use a bass asset if you have one, with Ivan Andreolli executing some memorable low-end licks and tricks for “Old, White and Italian”. The lyrical content appears to be more fun and lighthearted (“I’m Not a Zombie”, “What D’You Mean by Metal”), while the serial killer cover aspect probably fits the album title a little more accurately than the band’s thrash platform.