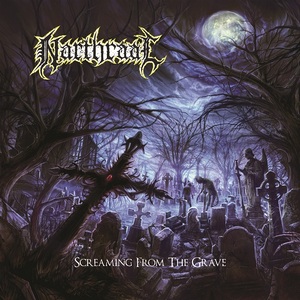 Old school Swedish death metal by way of Iceland. By old school death metal, it does indeed mean worship of the old school, as opposed to merely an influence. The type of thing that qualifies as the genuine article had you been given it as a blind “taste test” so to speak – the band has stepped up nicely from two older EPs for this first full-length. But the same general rules for enjoyment of this particular style do stay heavily in effect.

A solid understanding of what makes Swedish death metal so intrinsically rewarding is what keeps Screaming from the Grave an enjoyable listen. Just one listen to the energetic romp of “Worldwide Destruction” should be enough to sell anyone remotely interested the style to check it out. Galloping melodies that are just as sharp as they are catchy, and it nearly borders on melodic death territory. Just in case that’s not your thing – the slow, trudging grooves of “Envy” ought to convince you. The tracks later conversion to speedier territory gives it a visceral feel that’s ultimately very gratifying. The way that Narthraal combines melody with the usual stomp of HM-2 material is worthy of some praise – it may not be a new tactic, but there’s nary a track to be had that doesn’t provide a moment that one wants scream along with anthemic flair. On a final note, the HM-2 crunch is still there, but the recording has been done in such a way that it doesn’t overpower the entire mix, which also benefits the album as a whole.

One can always ask the question of whether or not the world needs yet another Swedish death metal wannabe, but in this case, the answer is a definite yes. It doesn’t claim to be particularly inventive but it plays the style to a tee, in a way that still brings the listener back for plenty of repeated, enjoyable spins.