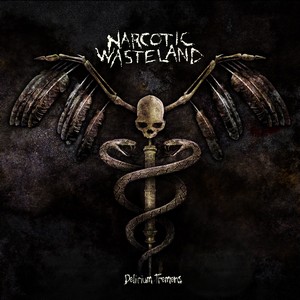 Formed by now ex-Nile member Dallas Toler-Wade, it makes complete sense if one was to wager a guess and think that Narcotic Wasteland was going to be a full-out death metal assault. But you’d also be missing out on some of the album’s charms. After a self-titled release back in 2014, the band has evolved into a frantic death metal machine, but one that also can handle melody as well.

Delirium Tremens travels at some incredible velocities. Blazing tempos offer a more thrashy take on death metal, with Toler-Wade’s distinctive barks sitting in the forefront to add to the overall brutality. It’s a combo that will certainly knock you back if you aren’t expecting it (or perhaps even if you are). Songs like “Faces of Meth” and “You Will Die Alone” offer a punishing take on thrashy grooves and death metal bite with almost no relent. But there’s something about the way that melody is soaked into even the most brutal and high-speed riffing that will draw you back once the speed rush wears off. Listening to a song like “Husk” allows for some investigation of this element, with dark riffing drawing you in, with later speed runs and massive grooves using intriguing patterns to create catchiness without compromise. The band does slow things down, with longer cuts like “Bleed and Swell” and “Pharma Culture” ramping up the melodic elements with mid-tempo force. Lyrics are worth mentioning as well, with the topic of addiction being one of the core elements (but not the sole one), offering a different approach to the topic of death. One that’s a bit more real than the fantastical or supernatural elements one tends to find in the genre.

Unlike a lot of modern death metal, which focuses on technical playing ability above all (sometimes rendering it sterile), Delirium Tremens is a visceral experience that wants to knock you flat on your back. It’s often rather fast, tempo-wise, but it’s written well enough that it never becomes a blur. Being supported by a knack for catchy under-the-surface melodies and intriguing lyrics gives it only added power.