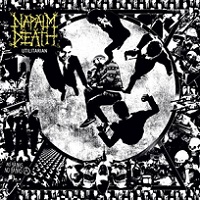 So venerable Napalm Death is at this juncture of their career, that doing something wrong would be utterly shocking. Unlike some of their death metal peers (i.e. Morbid Angel, Deicide), Napalm has their head screwed on correctly, yet the Brits play with a sense of urgency and gusto that reflects a band that still feels the need to prove itself. Obviously, Napalm doesn’t need to prove itself, but Utilitarian could be the band’s most vitriolic since 2000’s caustic Enemy of the Music Business.

Almost instantly, Barney Greenway’s imitable bark hits the ground running. The well-spoken and highly-intelligent frontman (trust us, Blistering knows of this first-hand) sounds as if someone to the proverbial piss in his Cheerios. He’s about as enraged and monstrous-sounding as ever, with his unearthly bellows providing some searing moments on “Protection Racket,” “Quarantined,” and “Blank Look About Face.” Special nods go to guitarist Mitch Harris for his vocal contributions on “The Wolf I Feed,” where the axe-man tosses in some Fear Factory-like clean vocals.

The band takes the occasional dip into the sorely-underrated mid-90’s period on “Everyday Pox” (which includes a saxophone solo from the legendary John Zorn) and “Nom de Guerre.” In fact, it is the less grindcore-oriented songs

that click the best – “Analysis Paralysis,” “A Gag Reflex,” and “Everything In Mono.” Sure, the blinding, fuck-all speed is ever-present, but when Napalm hunkers down into a throttling mid-tempo groove, they’re awfully hard to turn back.

Perhaps the present state of world affairs invigorated or possibly even incensed Napalm to the point of releasing their most vicious album in over a decade. Therefore, we can thank the Occupy movement, the Greek financial crisis, and anything else that gets under Greenway and co’s skin for making Utilitarian the monolithic beast that it is. Bands

that are a fraction of Napalm Death’s age could only hope to sound this pissed-off.