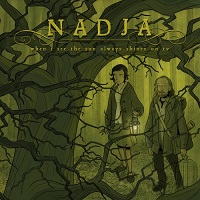 Having put out numerous albums, splits and EPs since their inception in 2003, along with touring, this Canadian duo don’t deserve to take any harsh criticism for putting out a covers record. The thing that’s always said about covers is that bands

should put their unique spin on things – which is just what we get here. The songs may have kept their original structures pretty much intact, but everything is slowed down to a doomish, shoegaze pace (even Slayer) and the walls of sound are laid thick with buzzing noise. Not that it detracts at all, a constant feedback hum might be enough to put many listeners off, but there’s plenty to treat the ears here. And it’s not just beyond the noise. The perfection is in the noise. They even manage to add extra fuzz to My Bloody Valentine’s “Only Shallow,” no mean feat at all.

So MBV might not the most original choice, they are after all, pretty much the inspiration for so many bands whose trade lies in the more feedback, droning, pulsing noise end of the spectrum but from there it takes a turn into different territory. It’s like flicking through a vast record collection with broken, static rumbling headphones on. When “Dead Skin Mask” crawls in it takes you completely by surprise. It’s a “hang on, I recognise this, I think” kind of moment. Absolutely terrifying, slowed right down and with humming drones in the background it’s a contrast to the disembodied bliss of “No Cure For The Lonely” (Swans). The vocals in “Dead…” have something far more menacing in them, proving clearly the power of words. Delivered in pretty much the same style as “No Cure…” it’s definitely darker and at this pace, hammering guitars and drums swirling in the cloudy fuzz adding to the drugged out, hypnotic feeling. A starting cover version. Elliot Smith’s “Needle In The Hay” always had something of a light drone feel surrounding it, especially in the chorus vocals, so here it makes absolute sense.

The song the album takes its title from is of course, A-Ha’s “The Sun Always Shines On TV

” which here is transformed back into a caterpillar. It’s like listening to the original on broken cassette and finding all these super, weird noises and parts you’d never heard before. Wrapping things up is the warm drone of The Cure’s “Faith.” Completely disentangling the original, it’s dreamy, floating nicely on a lulling, yet never intrusive drum beat, chopped up and drifting in a skin-tingling atmosphere.

If this was an experiment, it was a success, adding layers to already existing songs

and proving you can rework your influences to make them look more like you. Love Nadja – it’s impossible not to.