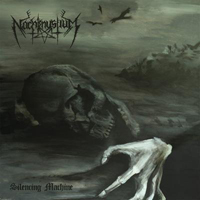 An artist being a self-indulgent artist can be at once the most rewarding thing for an audience or on the contrary, the most infuriating. For the fickle and dogmatic fan-bases (especially black metal), any degree of change or unorthodox growth often elicits consistent calls for condemnation over the betrayal of stylistic integrity. For Nachtmystium this was very much the case throughout the pair of left field albums that constituted the Black Meddle series. Psychedelia and industrial influences found their way into the band’s sound and became pervasive across 2008’s Assassins and 2010’s Addicts, leaving scores of disgruntled ‘kvlt’ fans across the land. Two years removed from Addicts and the band have returned to unleash Silencing Machine, a ferocious and resounding fuck you to purities and naysayers everywhere that the band creates purely on its own terms – the results of which are stunning.

As the title implies, “Dawn Over the Ruin of Jerusalem” opens with bits of noise, the few moments of decaying twilight before a ruined world is brought to light with a blasting fury the band hasn’t showcased in ages. While familiar, something here is very different; something has changed in the band. The fuzzed out melodies that drip through the guitars, the bleak atmosphere, the absolutely malevolent tone – these are the sounds of a world beyond saving. Complementing all of the standard instrumentation and rediscovered focus toward blackened intent are Sandford Parker’s suffocating and peculiar synth work, omnipresent on “The Lepers of Destitution” but present throughout. Their use is of a rare kind of focus here, always present but never overbearing, like an article of clothing just tight enough to never get comfortable with. This synth presence and the band’s newfound focus on razor sharp misery is readily married on “Reduced to Ashes,” a song that couldn’t have existed on either of the Black Meddle albums.

Not to say the sounds explored on those releases is completely absent here, this not all blast-a-thons and Chicago-born grimness. Though returning somewhat to a path charted with Instinct: Decay, the Black Meddle releases did not exist in a vacuum and their presence remains in pieces throughout the album. While no longer the focal point of the music, the experimental nature that consumed those albums is showcased here in a more ornate form, peripheral additions and minor motifs that fit within the greater sound. Slower tempos and synth heavy “Borrowed Time and Broken Dreams” and “I Wait in Hell” both embody this dual nature, the solo section in the latter coming across like something unreal. “Decimation, Annihilation” may be the darkest song the band has ever put to tape, emaciation and hopelessness personified.

Expectations were high for this release, many unsure the band had it in them to produce ‘true’ material again. For the hipsters, elitists, and dogma obsessed all alike, the album title Silencing Machine seems only too fitting. Album closer “These Rooms In Which We Weep” seems to go hand in hand with the absolutely gorgeous album cover in being an argument pointing to those who have protested the unorthodox pursuits of the band.

A long decayed corpse resigned to a world awash in barren wastes and creatively dead, perhaps this is the world Nachtmystium sees. The world those unwilling to change or welcome experimentation have wrought. Silencing Machine is a testament, a declaration of war against the blind and close-minded. Seething with hatred, misery, fear, wonder, of a band unhappy with the world around it and the focus of all the ambition and love of a band doing exactly as it intends and seeking cleansing through catharsis, Silencing Machine is above all, art. Not to be missed.