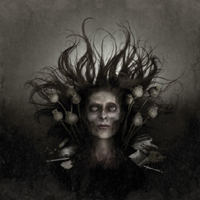 This should be the one that pulls Nachtmystium away from USBM altogether. Snippets and shards of black metal coated the band’s excellent 2008 Assassins: Black Meddle Pt 1, but with Addicts, any trace of the band’s primitive necro BM days are long gone. In a move that usually backfires, Nachtmystium have incorporated off-the-wall industrial tinkerings (lots of Killing Joke, psychedelic rock) into their sound and along the way, subtracted the once-prominent grim, grinding aura for an album that is wide open, thus placing the Chicago-bred band well outside of the box.

“High on Hate” is perhaps the only straight line to the band’s Instinct: Decayera, with singer/guitarist/mainman Blake Judd’s raspy, give-me-another-smoke vocals hovering over a Voivodian main riff. The jangly “Nightfall” (no, not the Blind Guardian song) is a definitive album highlight, utilizing the band’s underrated melodic pull. And let’s not leave out Judd’s interesting lyrical slant on drug use, which is what Addicts is about, in case one hasn’t deduced that. At least he’s not trying to hide anything, eh?

Deeper dives into Addicts find Nachtmystium toying with drum samples (“No Funerals” and “Ruined Life Continuum”), spacey black rock (“Then Fires” and “Addicts”) and quirky, albeit effective sound effects on “Blood Trance Fusion.” All of this just completely throws out the rulebook on what Nachtmystium previously clung to, although it still sounds very much in line with the band’s sound. Again, it’s rare that such a rash of experimentation and new avenues result in something as convincing as this.

Not sure if Judd and co. are going to entertain the route of the usual black metal hogwash that experimentation like this, is the embodiment of black metal.Addicts: Black Meddle Pt 2 is in no way a black metal album, but an extension of that style’s sound. If we had to draw a parallel to at least one band, it would be Ulver, who at the same juncture in their career abandoned black metal entirely. Nachtmystium hasn’t quite done that, but we can picture the band rapidly closing the book on that chapter.