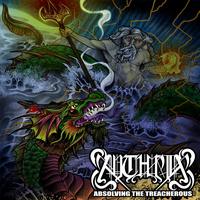 We all know that there’s been plenty of melodic death metal that continues to roll out, regardless of the way that it was bogged down by the bastardization of it, with plenty of keyboards and melodic vocals. Cleveland’s Mythrias don’t succumb to those pitfalls on their first EP, Absolving the Treacherous. Which means you should be ready for a blast from the past (in some ways).

Absolving the Treacherous features four songs and a cover (more on that one in a bit) of full-speed ahead melodic death metal. On the positive side of things, Mythrias take the older approach to melodic death metal, complete with twin-guitar harmonies and flashy leads, but they never look to ape a particular band (say, At the Gates, Dark Tranquillity, or In Flames). For their first EP, this is some strong songwriting – the melodies are consistently effective and memorable. They also keep the riffs dark, which gives the music a heavy edge that feels more akin to bands like Arsis or Detonation than the aforementioned pioneers. Then there’s the cover song, of The Offspring’s “The Kids Aren’t Alright.” Being a member of the camp that would prefer metal bands attempt to cover non-metal tracks, it’s a surprising and well-executed track, adding death growls and plenty of blastbeats to the mix.

There’s a lot of good stuff going on with Absolving the Treacherous if you are looking for melodic death metal that keeps an emphasis on the “death” aspect without sacrificing melody. Plenty of potential for the band if they can pull off a full-length of equal quality; there’s always room for another melodic death band of this quality.