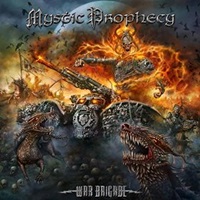 This German power/heavy metal band initially gained attention as one of the outlets for guitarist Gus G’s ubiquitous abilities (remember when he had Dream Evil, Nightrage, and Firewind all going too?), as Regressus and Never-Ending certainly delivered stirring anthems that straddled a Judas Priest meets Bay Area melodic thrash platform. Post-Gus G caused expansion to a quintet, and Mystic Prophecy became a touch more aggressive while still maintain a melodic balance – records like Savage Souls and Ravenlord striking a chord and establishing the band as a force to be reckoned with on the busy European touring/festival circuit. War Brigade as a ninth studio platter hones in on where the band feels at home – quick hitting four-minute arrangements that feature a ripe amount of double kick, varying mid-tempo or faster riffs, plus catchy choruses ready for audience participation.

Switching out another guitarist (singer R.D’s bandmate from Devil’s Train, Laki Ragazas joins for the departed Constantine) doesn’t stop the impact these 12 tracks have – although a little bit of modern slam and shouting chorus aspects makes “Burning Out” a possible future fan favorite or derisive left-field turn depending on where you think the band needs to go direction-wise. Otherwise, we get a fair share of thick double team Markus Pohl/Laki Ragazas riffs where R.D. can add his multi-octave power and propensity to the fold, check out “The Crucifix” and “The Devil Is Back” for a lot of heads down headbanging moments that stir up the inner Accept/Judas Priest maniac in us all. Veteran bands also understand the need to get a little heavier or dynamic at times to keep listener interest – the exotic tinges to the thunderous “Fight for One Nation” a blistering second half number that can also double as another call to arms song for the long-time MP contingency.

Those fortunate enough to purchase the digipack physical version will get a heavier rendition of a non-metal classic, Tom Jones’ “Sex Bomb” – an interesting effort that showcases R.D.’s bluesy register and fun-loving personality, the guitars alternating between older, psychedelic picking and heads down heavy distortion. In the end, War Brigade doesn’t veer far from the established power/semi-thrash platform Mystic Prophecy have consistently delivered for 16 years – which should be more than fine for the ardent followers.