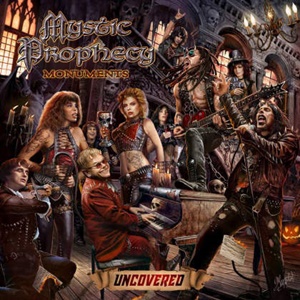 Veteran bands challenge themselves once establishing a proven formula to often stretch boundaries and inject vitality into the mix. Even as members come and go and the years fly by, those heightening aspects can change trajectories – or sink like lead into the sands of time. Mystic Prophecy have come a long way since their 2002 Vengeance debut album. Surviving the loss of elite axe player Gus G, they rose to a proven power/heavy metal headliner with solid efforts like Satanic Curses, Ravenlord, and 2016’s War Brigade. For their tenth album Monuments Uncovered, they reach into a treasure trove of cover classics outside the realm of metal or hard rock – including pop and rock classics from the 70’s, 80’s and 90’s, giving them a Mystic Prophecy makeover if you will.

It’s hard to dispute the timeless melodies and hooks in songs like Elton John’s “I’m Still Standing”, Donna Summer’s “Hot Stuff”, or Billy Squier’s “The Stroke” – so taking them into heavier platforms with distorted guitars transforms the material into an unexpected direction. And yet other songs like “Because the Night” or “Proud Mary” just don’t sound as convincing as the originals – almost as if the performances are generic and going through the motions. Dipping their toes into the 1990’s with Lenny Kravitz’s “Are You Gonna Go My Way” and Monster Magnet’s “Space Lord” isn’t surprising either – the latter featuring a clean guitar verse hook that truly hypnotizes and allows R.D. to use more of his bluesy, lower range effectively. Seeking out songs that bring back memories and still allow the listeners to recognize the timeless quality of the material isn’t easy – this scribe just feels that Monuments Uncovered would have been best served as maybe a crowd-funding perk/benefit rather than a proper full-length for their fans.

Now that the quintet has this tribute to the past out of the way, let’s hope the next studio record kicks things out of the park for Mystic Prophecy – as the fans deserve another passionate power/heavy metal effort from these musicians.