My Missing Half – The Lives I’ve Ruined (Self Released) 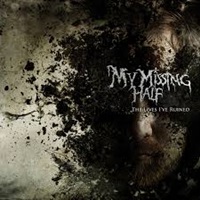 Mining melodic death metal bands in them there metalcore hills can be a struggle in these United States, so when you find an act from the Boston area like My Missing Half that swings further on the former than latter scale, you dig deeper in the hopes that the treasure you seek has arrived. The Lives I’ve Ruined is the quartet’s debut album, cementing their already productive show/recording history since coming together in 2011. Immediately impacting my views to the good is money well spent on a proper production job for these 10 tracks, as it’s not an easy task to maintain musicality amidst all the adrenaline laced guitar action, speedier drumming, and lacerating vo-kills.

The melody part comes in the talented guitar duo of vocalist Bijan Hennessey and Patrick Powers – skillfully filling the aural landscape through a range of mid-tempo and hyper speed harmonies and occasional point/counterpart chord combinations that rival many of their contemporaries like At The Gates on “Naturum De Montum”, early In Flames for the opening passages of “Amityville”, and even Machine Head meets Starkill for vicious opener “Skin Grafts”. Bassist Alex Elwell and drummer John Matthews take up the enviable task of propelling the foundation of these songs to steady tempo heights without causing things to fall off the tracks – adept at a more controllable, twin guitar oriented “Let Me Forget” (that features cool interspersed acoustic guitar nuances) just as much as the racing closer “Never Coming Home”.

Where slight metalcore edges come into play may be in the occasional breakdown during instrumental sections, or some of the vocal inflections Bijan chooses to employ – but they are done in more of a Black Dahlia Murder way and probably a part of the band’s makeup given their exposure/location to the birth of this scene decades earlier. He does vary his attack, from growls to blackened screams there’s plenty of variation for those who love aggressive, adrenaline-laced throat bombs. My Missing Half succeed because they understand dynamics need to occur in order for these songs to cement themselves long-term – be it double guitar trill runs in the aforementioned “Skin Grafts”, a slower neo-classical acoustic instrumental such as “Sedative”, or the grace of juggling restraint and unbridled chaos on highlight “Empty Dreams”.

Sure to move up the ranks because of their proper recording and songwriting prowess, The Lives I’ve Ruined shows that New England bands know a thing or two about the melodic death metal genre.