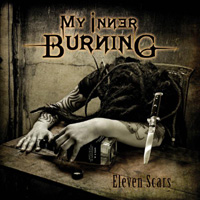 Surely My Inner Burning had all the right intentions when coming up with their moniker, but surely there’s a segment of assholes out there who will poke and prod at the band’s name, comparing it to the sensation one gets during heartburn and the like. Frankly, “My Inner Burning” doesn’t sound very appealing, much in the same way Firewind and Silent Force do. Some people need to grow up…Blistering included.

Nevertheless, Eleven Scars is the German’s second album, parlaying a brand of modern metal with female vocals that on the surface, should be ineffective. In fact, most of this album screams of a more modernized In this Moment, which for some, is a death-knell, but there’s some halfway catchy songs here. Nothing world-beating, yet a vast improvement over In This Moment, Eyes Set To Kill, etc.

Singer Becky Gaber is out front and center (like all female vocalists are), and she has her moments of worth, most notably on “Masquerade,” (a song that initially had visions of total nu-metaldom thanks to its bouncy opening riff), “For the Last Time,” and “Done With Denial.” Because MIB is so inclined to keeps things within the muscular realms of down-tuned modern metal, Gaber is afforded the breathing room to make her vocals the focal point…which in turn, makes her the most appealing aspect of Eleven Scars.

A bit odd to see a band like this on SPV, who for years gambled hard on heritage bands like Molly Hatchet, Manowar, Blackmore’s Night, etc. My Inner Burning couldn’t be more dissimilar to the aforementioned acts, and they’re going to find themselves awfully out of place with a sound that is more fitting for metal circa 2001 than 2011.