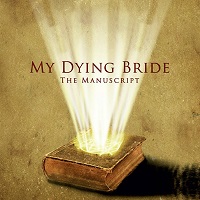 Aaron Stainthorpe revealed to this scribe late last year that extras from the Map of All Our Failures sessions would be appearing at some point in 2013, and lo and behold, here they are in the form of the four-song The Manuscript EP. It’s not uncommon for bands that have spillover material from a proper studio recording, but the usually methodical My Dying Bride have been basking in a run of productivity that rivals those early EP days.

Given the bare-bones, back to basics, vintage-without-sounding-as-such mode of Map of All Our Failures, the four songs that encompass The Manuscript are equally as realized, maybe even a smidge more effective than the full-length given its brevity. Stainthorpe’s patented moans and insufferable vocals on “Var Gud Over Er” are suitably wretched, linked up with droning guitars. “A Pale  Shroud of Longing” is probably the pick of the bunch, as morose harmonies shine as a far-away beacon in a fog-shrouded landscape. (How’s that for visualization?) And while the casual observer might scoff at reading the title of “Only Tears to Replace Her With,” the ardent MDB supporter will come to actualize this number as one of Stainthorpe’s grief-stricken spoken word bits that place the man’s excellent poetry on display.

The Brits will be the first to tell you that the space they’re in is equal to that of their unmatched mid-90’s days, where virtually anything went, and the results were brilliant. It’s not all peaches and cream with My Dying Bride (nor should it ever be), but if the b-sides that make up The Manuscript are an item of the band’s creative drive at the moment, then things are looking awfully bright for a band now past its second decade of existence.