My Dying Bride – For Lies I Sire (Peaceville Records) 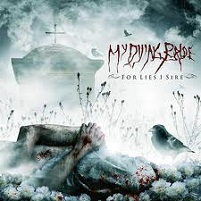 The violin is back and almost instantly, you can’t help but surrender to its enormous weight and depth. No band has made better use of the instrument (sorry Kansas), so its return from an 11-year absence is totally welcome and frankly, awe-inspiring. And so is My Dying Bride’s newest and 10th release, For Lies I Sire, the second best post-“Classic Six” album, right behind 1999’s Light At the End of the World.

The band wastes no time in hauling out the aforementioned woodwind on “My Body, A Funeral.” Slow and sobbing, the track makes excellent use of the interplay between guitarists Andrew Craighan and Hamish Glencross’ melodic riffs and Katie Stone’s mournful violin lines. From there, the band travels back to familiar ground (think a mix between Angel and the Dark River and Like Gods of the Sun) on “The Lies I Sire,” which sees MDB wrestle with its now patented slooow tempo and tortured vocals from singer Aaron Stainthorpe.

New drummer Dan Mullins turns in an inspired performance, even getting colossal drum roll treatment on “My Body, A Funeral” and the death metal-tinged “A Chapter In Loathing.” Stainthorpe’s introspective poetry is traveling down some seriously morose paths this time out, as he grumbles, spits, and moans his way through the excellent “Bring Me Victory” and somber “Echoes From A Hollow Soul.”

If anything, For Lies I Sire is an instant charmer, something 2006’s The Line of Deathless Kings wasn’t and to lesser degree 2001’s The Dreadful Hours could never quite achieve. But this time they’re presenting it all, right front and center; the style and sound so many have been clamoring for. Talk about appeasing everyone, eh?