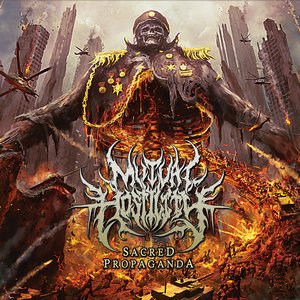 A breeding ground for aggression, sometimes it’s not about standing out when it comes to death metal, so much as being able to capture a certain element well. Mutual Hostility are a new American death metal act, with Sacred Propaganda as their first offering. The band’s cited influences are pretty clear, such as Napalm Death and Cannibal Corpse, but it doesn’t mean that the EP isn’t a walloping good time.

The piece that Mutual Hostility really nails is the aggressive, in your face mentality that is needed for success in the genre. It’s clear that they’ve studied their influences well, and Sacred Propaganda is a pretty much a musical fireball. It takes no time for the band to really get off the ground and start, as “Pyramid of Hate” instantly opens with oppressive speed and vicious riffing. Some light grind influences can come in, but this is more or less a pure-breed death metal machine. One that is quite content to high the high speeds at full force. But despite the onslaught of energy the band unpacks, it doesn’t get old either. Frequent tempo shifts and tweaks to the attack are the norm in each song, wisely slowing down at key moments to put the listener into full headbang mode. The groovier stuff works just as well as the speedy moments, and works as a bit of a palette cleanser while still doling out maximum aggression. It’s the sort of thing that is really built for this smaller time-frame, and the band uses that to their best abilities – this is no-frills death metal at its best.

As noted, it sits squarely in the usual death metal focus of things, but the way Mutual Hostility has crafted a debut of the genuine article is worth some celebration. The riffs are fun and frantic, and they leave the retro and tech stuff to bring out a punchy and effective piece of music.