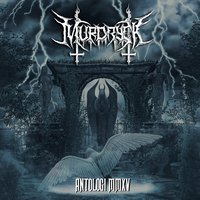 As a metal lover and hack metal journalist it’s always a roll of the dice when you get new albums sent your way. So Murdryck’s newest release Antologi MMXV hit my email and I didn’t think much about it. The band name is a bit peculiar and the album title is redundant. The Necro Lord style cover art shows a demon approaching grave yard type scene during a storm at night, cool but I’ve seen it before during the hey day of second generation black metal.

So I push down my preconceptions and finally spin Antologi MMXV. What I found lurking inside was a fierce mixture of well written extreme metal which leans heavily on black metal. After a prerequisite (i.e.: unneeded) synth introduction track, Antologi kicks off with “As the Moon Bleeds…” and goes right for the throat with following track “The Ascension”. These two tracks show case Murdryck’s dynamic black thrash attack, which hammers a melodic sensibility along side it’s brutal blast beats. I’m almost reminded of older Sacrementum/Necrophobic at points with just a hint of heavier Naglfar moments. I use these comparisons, but is much more to Murdryck’s dynamic sound than just black metal as they use elements of thrash and heavy metal to effectively add new dynamic to their hymns.

What keeps Antologi MMXV so fresh is the song writing. There has been care and attention paid to this album and every track has something memorable about it that will get stuck in your head. Murdryck also have an interesting tendency to betray you mid song and throw a curve ball that livens up each track. I am admittedly a huge fan of second generation black metal and Murdryck play right into that time period perfectly with this album.

Antologi MMXV is a prime example of how to create an album that gleans great moments of black metal’s illustrious past while heading forth with iron fist into the new age.