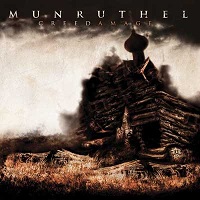 The former Soviet Bloc can still seem like a different world from here in North America, in some ways it is, and one thing that shouldn’t be overlooked is that some fantastic metal has been coming from behind the old Iron Curtain for a while now.  Ukrainian bands such as Drudkh have established worldwide fandom, including here in the US.  Nokturnal Mortum, to a lesser degree, as well as bands such as Arkona and (label mates) Khors.  The ethos that permeates the metal from this part of the world is Slavic Paganism and it synthesizes so well with the realm of black metal that it certainly has come into its own subgenre.

Munruthel, who went by the same name while he was the drummer for Nokturnal Mortum, is the one-man project by Vladislav Redkin.  The oddly named CREEDamage was not an album on my radar, and was released at the end of 2012.  For me, this is simply one of those hard-to-beat genuine gems that a ravenous consumer of metal can come across from time to time.  And it is, certainly, the best symphonic pagan metal that I’ve heard.  I’m cheating a little, because I don’t know that I’ve heard much specific to this particular subgenre.  It’s a sound that could very generically be described as Nokturnal Mortum colliding with Dimmu Borgir, but it’s so much more than that.  There is an authentic vibe that just seeps out of the music of the Ukraine that needs to be heard to be understood.

This album is a magnificent swath of beauty and fury.  It’s almost cinematographic in scope and is an absolutely enjoyable journey of musical depth and weight.  It features guest vocals from Arkona’s Masha “Scream” as well as one of best Bathory covers that you’ll hear.

This multi-instrumentalist seems, to me, to be painfully unknown or at least, under-reviewed.  Not unlike another criminally unknown artist (an Aussie who goes under the name Aquilus), Munruthel deserves to be heard, for he has created something truly special.