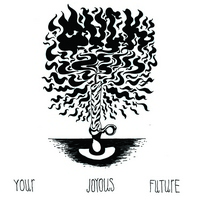 When pondering the definition of muck: a collection of dirt, rubbish, or waste material, it seems that the Icelandic band chose well. Not that their music is a bunch of rubbish, but rather a collection of rather filthy things that have been merged together in a way that seems oddly cohesive. A strange compliment to a band indeed, but if you read on it works.

Muck pull from a wide variety of influences to create something that feels more than the sum of its parts. As you progress through Your Joyous Future, you’ll hear elements of noise-rock, post-rock, hardcore, and grunge most prominently, but the careful listener can detect even traces of grind and black metal. Sounds like a mess right? This is where Muck’s cohesive elements come into play. They can crank out aggressive little ditties like “Provoke Me” and “Blissless” with plenty of rage and vitriol, but they can also soak in some variance and restraint into “Blind and Bent” (which features some catchy grooves and a post-rock melody) and almost doomy atmosphere of “Martroo.” The only time this mash-up really goes a bit too far is with “Waiting.” From a personal standpoint, the clean vocals that find their way into this one just push it too far into an alterative/grunge direction and drives away from of the momentum from the previous, more blistering tracks. There are other spots where the cleans work, most notably on “My City,” which places them over driving and energetic riffs.

With a half-hour runtime, Your Joyous Future gets in and out with no major fuss. An interesting mix of some varied genres leads to an offering that is more diverse than it may initially appear, with maybe one instance of trying to push it too far. However, it’s always nice to see a band willing to push some boundaries rather than settle for the status quo. Crank this one up to achieve maximum fury!