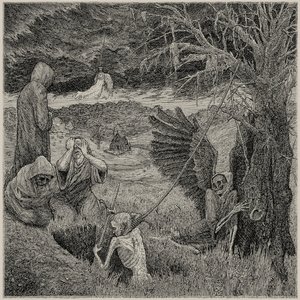 Hell truly is other people. Sometimes the other is rendered in a generic or general sense – the public. Other times it is pointedly an individual to which you are inexorably tethered. Hell is also the plague that has seen significantly less coverage this year given our tenuous position strapped under the biological yoke: drug abuse. These hells combine in Obliviosus, the new solo album by Hell (hence all the use) center figure M.S.W., an album experience documenting the deeply traumatic effect of drug abuse within the family space.

For anyone familiar with M.S.W.’s work in Hell, Obliviosus will offer some parallels in its overarching doom framework, though this album is notably more despairing and softer around the edges owing to its greater integration of post dynamics. Four songs, 38 minutes, and a resulting lean listening experience even when considering that more than half of the album’s breadth is encompassed in the eponymous closing track.

Opener “O Brother” sets a bleak opening tone, leaning hardest into some of the album’s slowest passages and embodying a truly funereal spirit. In times of separation all we can often do, the female vocals appear to remind us, is mourn. Beyond the veil of mourning comes enraged disappointment and the interplay of those emotions is the wrathful heart that propels the remainder of the song. The lyrical underpinnings across Obliviosus, sparse as they may be, are central to the full experience.

An experience continued in the instrumental “Funus” and the surging (at times, almost tidally) “Humanity”, with the many harsh tones here joined by M.S.W.’s own clean vocals. The aforementioned closer, “Obliviosus” ties the threads present elsewhere together in a spacious, even luscious journey of ascendency. Familiar doom transitions into the album’s strongest post-rock influenced moments, with a third of the song ever soaring toward one heaven or another. That is not to say the album crashes out on a positive note for the song closes out with several minutes of droning entropy – a stark reminder that beyond the world of the living exists only silence.

It is likely in no small part due to the multi-order shitshow that 2020 has been for much of the world, but this has truly been a summer slate for mournful doom releases. Racism from free world leaders, the physical world aflame, or the ever-present realities of COVID squeezes the economic life out of much of the populace, it has not exactly been a year for celebrations. Obliviosus focuses on a more personal trauma than those I’ve laid out here, though the threads of mourning share remarkable consistency, no matter the scale for which they must be applied.

Obliviosus is catharsis through mourning.