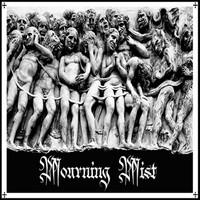 Being avant-garde is fine…it’s just that you have to be convincingly avant-garde without the need to toss the kitchen sink out of the window. Black metal, as has usually been the case, is the most common of destinations for anything avant-garde, running the gamut to really weird, but listenable (Negura Bunget), barely comprehensible and not-so metal (Solefald), to on the fringe and quasi-memorable (Ephel Duath). So to speak, it’s a terribly mixed bag, which is to be expected with such an approach. In the case of France’s Mourning Mist, the mold appropriately has been altered a bit.

Formed and guided by violin player Ecnerual, the band doesn’t have much to show for themselves outside of said debut in question. With nothing to base the band upon, it’s quite difficult to place Mourning Mist in the context of avant-garde and black metal, although some of their ideas due run in concert with other worthy acts. The violin work of the aforementioned Ecnerual practically serves as another guitar. Probably the closet act to relate this to would be Dornenreich, who also employ a violinist, yet his role is more melody-driven, whereas the work on cuts like “Freefall” and album highlight “Rise and Decay” are indicative of a player treating his instrument like more a part the whole rather than to stand out.

Indeed a handful of these cuts are spacious and relatively out-there, yet the palpable quality to the pulsating “Rage” and subtly dynamic “Lament” bring forth the idea that Mourning Mist might be more singular than we initially gave them credit for. Therefore, write this one up as worthy fodder in the weird black metal conversation, a band whose extremity and esoteric ideas don’t get in the way of the greater good, which of course, is the songs.