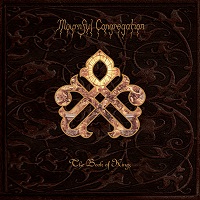 An album like The Book of Kings is a rare moment for the funeral doom scene. Being that its sound naturally restricts practically all of its bands from doing anything else but lurching at a snail’s pace while trying to recreate sounds akin to the bowels of hell, Mournful Congregation’s imaginative advances here are strong enough to push them to the front of the funeral doom pack. It’s a monstrous four-song feat for a band who has been at it for 20 years, perhaps proving there’s more to this style (and band) than meets this eye.

Lead-off track “The Catechism of Depression” (great title, by the way) is a prime indicator of where the album wants to go, guided by dragging tempos and sobbing guitar lines. The song

finally makes a break for it at the tail-end of its 20-minute duration, as a sinking twin-guitar harmony ends up turning what appeared to be a rather workmanlike song from the band into one of its finest to date. The acoustic “The Bitter Veils of Solemnity” distinguishes itself from the pack (obviously), marking a welcome break from the constant sonic crawl the album subjects itself to.

The real test of wills comes via the 33-minute long title track. As one of the bands’ patented lull you to sleep (or death…whichever comes first) songs, “TheBook

of Kings” isn’t glued together haphazardly like most epic numbers Rather, it gracefully flows into one area to the next, as the tempo remains at a dragging pace, but man, some of these riffs and unearthly bellows can put one in a trance if one allows it to. Any other band attempting something like this would fall way short of the mark.

Entirely listenable music this is not, although Mournful Congregation might be the first funeral doom metal band to at least attempt something halfway palatable with The Book of Kings. Put it this way: This album is not for the impatient, nor for those with a short attention span, but once you wade through the fog, gloom, doom, and sorrow, there’s some serious light to this thing. Who would have thunk it?