Mourners Lament – We All Be Given (Hammerheart) 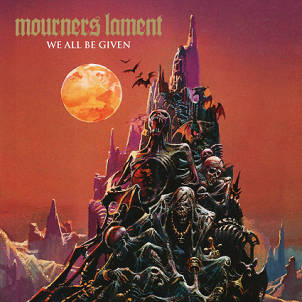 Their name taken from the Opeth song “Harvest,” where Mikael Åkerfeldt gracefully croons “mourner’s lament but it is me who is the martyr,” Mourners Lament are a Chilean death/doom ensemble who have been kicking around since 2004. We All Be Given happens to be the band’s first proper full-length, this, after an eight-year period of silence going back to their Unbroken Solemnity EP. Nevertheless, the band props up a relatively hardy and mostly compact six-song offering on We All Be Given.

Best compared to Novembers’ Doom (here’s a tip: don’t listen to the two bands back-to-back. It may prompt confusion.), Mourners Lament posess the expected grip on slow-churned, heavy-on-the-chug doom. While not quite as emotive as Novembers’ Doom, ML manage to tug at the ‘ol heartstrings on “Slumbers” by way of a nimble-footed melodic guitar riff placed at the song’s center. The album comes to a head on “Suffocating Hopes,” which trods along in funeral doom fashion, regularly pumping out blustery guitar harmonies to go along with the always-gruff vocals of Cristian Ibañez, who, in between his bouts of harshness, throws in some spoken-word bits.

This type of one-tempo, or “down-tempo” doom eventually tends to reach its tipping point after a while. Mourners Lament do their best to fend off sonic complacency with double-bass ripples on “This Storm” and the somewhat meandering, 13-minute title track. Ultimately, We All Be Given is demonstrative of a band who is never in a hurry to let the doom slow-burn carry on, deeper down, into the gallows, and through the depths.