Motorhead – The World Is Ours Vol. 1 CD/DVD (EMI/Motorhead Music) 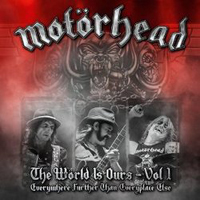 Lemmy sure likes to pop out live albums, doesn’t he? The World Is Ours Vol. 1 is the band’s sixth official live release since their glorious inception in the 70’s. Obviously, it’s not as crucial as 1981’s No Sleep ‘Til Hammersmith, but frankly, few live albums are. On this particular release, the band’s trek across the globe in support of 2010’s The World Is Yours is documented, with the usual amount of rock ‘n’ roll gamesmanship on full display. Like anything else could be expected…

Consisting of three discs (one video/two audio) The World Is Ours Vol. 1 focuses primarily on the band’s April 2011 show in Santiago, Chile. In South America, Motorhead are pretty big (as are a lot of metal bands, actually), so it’s cool to see the massive crowd go wild when Lemmy hits the stage to announce: “We are Motorhead, and we play rock ‘n’ roll!” From there, live staples like “Iron Fist,” “Stay Clean,” “Metropolis” and “Killed By Death” are aired, along with newer cuts like “Rock Out,” “The Thousand Names of God,” and “In the Name of Tragedy.”

The trio of Kilmister, guitarist Phil Campbell, and drummer Mikkey Dee are in top form, especially Dee, who has been far and away the most valuable addition to the band’s lineup in their storied history. Plus, the Swede (who once did time in King Diamond) is fun to watch – just check him out during ”Over the Top” and seminal “Ace of Spades.” The audio portions reflect the live sets (split into two discs), while bonus features include backstage footage and interviews in Santiago, Manchester, and Atlantic City.

Amazing that Motorhead is still alive and kicking, even though Lemmy is in his mid-60’s. As evidenced by the footage on The World Is Ours, there looks to be nothing slowing Motorhead down. There’s nothing remotely mandatory about this collection other than providing one the opportunity to marvel at a bunch of old dudes who simply refuse to give it up.