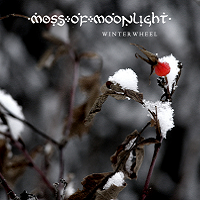 Frankly, the allure behind Cascadian black metal should have stopped with Wolves in the Throne Room. They’re the only band that exalts such a territory without coming across like a bunch of coffee shop-turned-black metal latchkeys. We get it: Your section of the country has better stories than everyone else’s; the land is better; the farming is great, etc. etc.  DR pines for the day when “Yinzer metal” has its day in the sun, just to prove that getting giddy for geographical metal is a bit overdone. Appropriately, Cascadia’s Moss of Moonlight don’t quite get the message on Winterwheel.

Comprised of the duo of Cavan Wagner (growls, male vocals, guitars), and Jenn Grunigen (drums, percussion, female vocals), Moss of Moonlight is a cliché-filled blackened folk metal band. You know the type: Wistful female vocals, ghastly black metal shrieks, mounds of acoustic guitars, and a concept that champions hearth, the earth, and Paganism. It wouldn’t be such a deterrent if the band was up to speed musically, but a lot of this stuff drags and stalls, like the bland melodic guitar lines of “Catte,” or the false BM posturing on “Eole.”

Moss of Moonlight may not lack for imagination when it comes to piecing together a concept, but when thrust up against the bands that have individuality and are convincing, it’s apparent they have a long way to go based on Winterwheel’s creative malaise. But hey, DR hears the weather in the northwest is nice.