Mortuus – Grape of the Vine (The Anja Offensive) 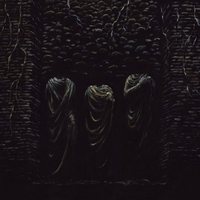 Executing in a manner diametrically opposite from a different recent release (Abazagorath), Mortuus on Grape of the Vine nevertheless occupies a similar flair for the old world values of black metal. This time, however, instead laced along on furious tremolo patterns and blastbeats eternal, the maelstrom is a slowburning one. Not depressive in pace but instead methodical, the atmosphere here is one of complete suffocation, the winds that often carry in the darkest parts of night to mask the activities of those who wish not to be known. The songs individually are lengthy and their many surfaces slow to reveal the shadows within, but this means the experience becomes more rewarding with time.

Obligatory opener aside, “Grape of the Vine” sets the tone that the rest of the album follows, medium to slow pacing while the guitars wash over one another through a series of movements and minor melodic asides. In something akin to a meticulous ritual, it often feels that the music is seething, an unseen pressure just beneath the visible surface and always on the threat to destroy all things beyond it. Aside from the occasional double-bass heavy section like in that which underscores parts of “Nemesis”, however, that tension and restraint is never broken. The perpetual dark that this album seeks to embody is impressively maintained throughout.

The only real knock is that upon first listen, especially if the listener is tuned out, there is the chance that most of the album can flow by without anything taking root. An absence of speed and the majority of melody being expressed indirectly means that the album can come off as samey until it has had time to settle in. Like the rituals the album (and even the cover) convey the prize lies within the experience of the ritual itself rather than in the exaltation of the completion. It’s demanding and unforgiving but Grape of the Vine is an experience to be had as there are few out there like it.