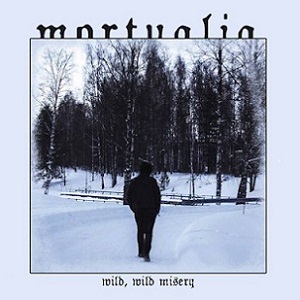 Surely the first time the words “wild” and “misery” have been used in an album title, the aim, obviously, is to portray how deep one can exactly plunge into the throes of despair. It backfires for Finnish one-man black metal band Mortualia, sounding like a comedic take-off on the gaggle of Goth and black metal bands who have been able to properly relay such feelings without sounding contrived. Because Mortualia, or rather Shatraug (real name: Ville Iisakki Pystynen) is so singularly focused on melancholic BM on Wild, Wild Misery, there is something to salvage here. Sure beats calling the thing “Mild, Mild Misery.”

There is something to be said for monotonous, hypnotizing black metal, but Shatraug really pushes it here. His compositions are meandering, devoid of tempo changes and riff switch-ups, with it all coalescing into one giant snow bank of minor chord plucks, odd melodies, and the man’s standard-fare shriek. However, a few of these cuts are able to break through, like “Return to Silence,” a number that features a pulsating main melodic riff, and “Emptiness of All,” which serves as Wild, Wild Misery’s high point thanks its Burzum-like crawl. But then again, Shatraug’s preference to play these songs at half-time causes little distinction, with the title track and “Nothing is a Given” eventually whimpering out as the album progresses.

Then again, point taken, Mortualia. The band has rightfully asserted its droning, complacent sound, tied to an album title that serves its purpose of laying out black metal that exists right on the upper-levels of despondency. The only question remains is why is Shatraug staring longingly into a beauteous snow-covered landscape instead of the abyss?