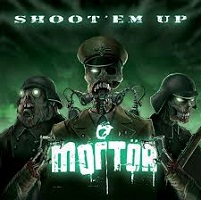 Now here’s a band that slices and dices with a vengeance through 14 tracks of death/thrash goodness. Mortor hail from Ottawa, Canada and although born through the creative fervor of rhythm guitarist David Paquette, the intended solo project has turned into fulltime viciousness. Having a fulltime band affords Paquette the opportunity to bring this well-oiled machine to the heavy metal masses, and the result is the band’s second studio release.

Shoot ‘Em Up fires on all cylinders (no pun intended) and captures a blistering sound of razor sharp riffing, punctuated by intense drumming and unyielding bass-lines to boot. Hell, I should point out right away that my ears were assaulted by the meaty guitar hooks, as if the band were channeling the Teutonic spirit of such acts like Kreator, Sodom and Destruction. There’s no doubt this band can execute sinister sounding death/thrash with the best of them and all you have to do is run down the track listing to affirm this statement.

In fact, songs like “Locked and Loaded,” and “Whisky Surgery” provide a barbaric attitude that sets the tone throughout this release. The songs as a whole are short, well crafted and exhibit that killer instinct I found missing on their debut in 2010. If you are wondering what has changed since said debut, it might be the maturity level or technical prowess seeping through that is grabbing the listener by the ears and dealing out a severe thrashing.

Joining David Paquette is lead guitarist Antonin Perras-Foisy and Jonathan Boulay on bass. Now this trio pushes the limits, going full-throttle and spewing out riffs that could make a sane person scream in defiance. I kid you not when I say this and I suspect that vocalist Yolin Lafreniere will further accentuate this point when his terse growls rips right into the heart of the listener. The man’s skill set as a vocalist is dead on given how he takes command of each song, putting his personal stamp on this punishing brand of death/thrash

I do hope Mortor gain some notice with this release. The music avoids the paint-by-numbers sound often found with bands of this ilk, and the heavy dose of death and thrash culminates well as a hybrid of two distinct genres. I also believe this should appeal to those who like their music loud, fast, and heavy, so Shoot ‘Em Up truly provides that and much more. 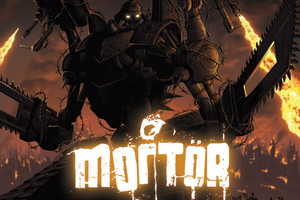