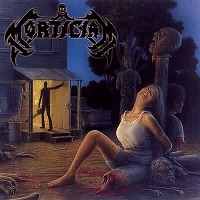 Mortician’s Chainsaw Dismemberment originally saw the light of day back in 1999 but Hell’s Headbangers recently saw fit to re-issue it as a 2LP with a gatefold cover.  Mortician has always been a band that elicits strong reactions from those in the death metal community, and this re-issue of the band’s second full-length album will do nothing to change that.

To the uninitiated, Mortician continually follow a similar structure to each of the 28 songs you’ll encounter here.  First, insert a clip from a horror movie that usually takes up a significant portion of the running time of the song.  Then allow the death/grind/gore to begin with distorted bass, ultra-low undecipherable growls, and alternate between equally distorted and low-tuned guitar chugging and obnoxious and obvious drum-machine blast beats.  Rinse and repeat.  Most of the songs you’ll hear will not last more than 2 minutes (insert lame sex joke here).

It’s barbaric to say the least, but there is/was an audience for it.  It’s just a matter of determining whether or not you fit that target demographic.  To their defense, when you hear a Mortician song, it’s instantly identifiable, whether or not there is talent behind it is truly in the eye (or ear perhaps) of the beholder.  Bottom line: if you like(d) Mortician, it’s worth picking up but otherwise it’s safe to avoid this one.