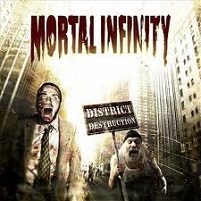 As important as the Bay Area has been to the development of thrash, we cannot forget the impact of the German thrash brigade through the years, especially their own “big three” of Destruction, Kreator, and Sodom. Their consistency to deliver new material for over 30 years gives hope to the younger generation clawing their way up the scene- which is where Altotting, Germany’s Mortal Infinity find themselves in with District Destruction.

Taking in their domestic forefathers like Kreator or Destruction with their razor sharp riffing presence, the five-piece also add in a little bit of the modern American attack a la Lamb of God or Pantera on some of the shifting rhythm changes and obvious ‘money’ groove parts during “At Dawn of Death” and “Condemned Rising.” Guitarists Sebastian Unrath and Thomas Harlander lay down some seriously tight, addictive rhythms, the type that could steamroll a semi, much like the best Hunolt/Holt Exodus era of the mid to late 80’s. Check “Radical Response” and “Thrill to Kill” for inevitable hair windmill action in this department.

Vocalist Marc Doblinger has the lung capacity of Rob Dukes but the scream ability of Mille Petrozza – his melodies spitfire and forceful with a sense of clarity that most of the new generation lack. The rhythm section of bassist Daniel Hofer and drummer Mathias Erber have the unenviable task to shift pace on a dime and then kick things into high gear on similar short notice, with “Retribution” being a great example of their strong thrash knowledge.

No ballads within earshot, District Destruction will be on the radar screen of old school and new school followers of this movement. Grab your leather jacket and strap yourself in, as Mortal Infinity look to ensure permanent pit annihilation with this release. 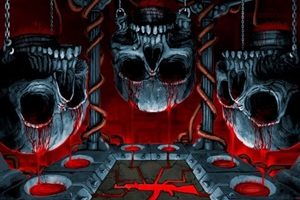