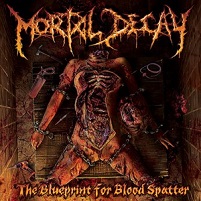 Despite their 20+ year existence, The Blueprint for Blood Spatter is only Mortal Decay’s fourth full length, and their first since 2005’s Cadaver Art.  With Malignancy’s vocalist Danny Nelson in tow, Mortal Decay have come back to the death metal realm with more relevance that one might expect.

Though not the most prolific of bands, Mortal Decay thankfully haven’t shut themselves off from the rest of the outside world in between records.  Despite having one hand in the olden brutal death metal scene (mostly of the NY variety), there is enough variation and influence of some more modern techniques that keep things interesting.  You’ll find plenty of slam-inducing riffs but there are a number of flashy solos and moments of technicality that never approach blatant wankery that it keeps itself from a simple 32-minute exercise in blurred blastbeats and growling.  There even seems to be some blackened atmosphere on parts of “Nocuous Compulsions.”

There is one complaint that can be found with The Blueprint for Blood Spatter, and that is the production.  For a brutal death metal assault, the guitars just feel too thin here.  With the technical riffing, a thicker and cleaner approach could really make some of these moments pop, as well as providing the needed crunch for the destined-for-the-pit riffs that frequent the disc.

Weak production aside, Mortal Decay have proven that they still have plenty of life left in them.  The Blueprint for Blood Spatter may not shake the foundations of death metal as we know it, but it’s good at what it does.  Perhaps we’ll hear from them sooner than eight years from now for the next batch.