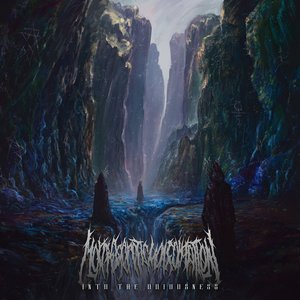 RealityFade seems to be an up-and-coming label for those who are interested in getting their eardrums pulverized by some extraordinarily brutal death metal. The latest release comes from Morphogenetic Malformation (whom have also released a reissue of Dominion of Primordial Chaos recently), who bring some uber-heavy slamming death metal from Russia.

There’s nothing really outstanding or innovative about Morphogenetic Malformation’s attack with the material, but it’s quite heavy and thoroughly convincing. Everything that you have come to expect from the genre is present, with super-low vocals and gurgling, lumbering and chugging riffs, and frantic bursts of speed with an inordinate supply of blastbeats. With all of that accounted for, what does keep the band up and running, where many of these types ultimately fail, is that they never take things into utterly ridiculous territory. There’s a bit of pacing and dynamic flow involved in their tempos, and some deliberate songwriting to make those super-slow chugs have a massive effect, be it a natural progression into them or a dive from speedy tempos. They change up the formula instead of relying entirely on it to a fault. Since there’s a more natural rhythm to it all, the heaviness oozes from the slowdowns and the speed runs deliver a well-earned dose of adrenaline. There’s appropriate build-up and payoff, and Morphogenetic Malformation seems to grasp this concept well. Pick a track, and it’ll do everything it can to knock you backwards with brutality.

Into the Odiousness is gargantuan in its heaviness and execution. While it’s what you want from the genre, there’s no need to deny a promising prospect just because it sounds similar to another act. The fact is that Morphogenetic Malformation have build up a fine base for themselves to deliver brutal death metal with relentless heaviness, without making the listener grow tedious of it.