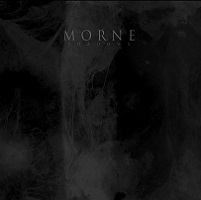 If funeral doom is the proverbial snail pace-setter, then a group like Massachusetts’ Morne are the slightly more motivated tortoise. Their 2011 Asylum effort hunkered down with bogged-down doom riffs, performed with a sense of despair that was supremely convincing. The template is securely in place for these lads, which explains why their third album Shadows is the obvious next step in their evolution.

Only four songs comprise of the album, so it’s pretty obvious that you’re going to get lots of slow-rolling riffs, a lot of which are repeated until they run their course. Luckily for Morne, their ideas are first-rate, a cut from the British doom block with a melodic twist. Opener “Coming of Winter” swings the pendulum and gets the tempo at least into first gear, allowing for a head-bobbing main riff to take control. “A Distance” is where Morne throws everything into the pot: a crisp clean guitar break, careening melodies, and a lurch ample enough to move a boulder or two. Clearly, the apex of the album.

The band saves the tried-and-true tempered doom moments for the pair of “New Dawn” and the title track, the latter of which is cloaked in space and despair, as vocalist Milosz Gassan bellows and writhes, all the while, a searing build-up starts to take form around the song’s halfway mark. Just another day at the doom office for Morne, apparently. Shadows is top-notch stuff all the way around.