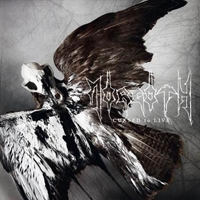 As the industry standard goes, live albums are usually created in order for a band to complete their recording obligations to their record company. Since a live album carries the same contractual weight as a regular album, most bands

pop one out to get off the record label in which they presently reside. In essence, live albums, and especially death metal albums, typically carry little or no importance because of their flighty and less-than-intimate nature. Off the top of your head, rattle off one seminal live death metal album? Yeah, Blistering can’t do it either.

The recently reformed Morgoth are using Cursed to Live to not only commemorate the 20th anniversary of their Cursed album, but to also ease them back into the death metal underground after a significant time away. Recorded at the 2011 Way of Darkness Festival

in all, most of which focus on Cursed, although it’s quite difficult to disseminate which song belongs to which album…there’s an awful lot of bleed-through across the board here.

Utilizing virtually the same elements as their Swedish neighbors ala Unleashed and Entombed (early years, of course), Morgoth’s speed-laden death metal sound lacks the sort of immediate punch that made early 90’s death metal worth getting excited about. The limitations of a live album are certainly in play here as well, with the guitars of Harold Busse and Carsten Otterbach sounding like they were run through a giant-sized fan. It doesn’t deter from the brutal aspects of “Exit to Temptation” or the Obituary angle of “The Travel

,” but it doesn’t quite make one want to head out the door to check out Cursed.

Since Morgoth was basically left in the dust by everyone in the early 90’s, their chances of a proper rebound appear to be slim. And it’s not because of the ho-hum nature of Cursed to Live. It has more to do with the proliferation of bands who did the same thing, only better, and when you factor in the recent rash of retro death metal bands, Morgoth has a very steep hill to climb.