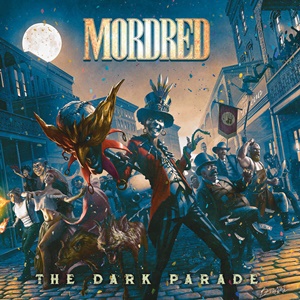 Pioneers of the funk/thrash combination style during the late 80’s/early 90’s, Mordred stuck out in the Bay Area through the employment of keyboardist/ deejay Aaron ‘DJ Pause’ Vaughn and vocalist Scott Holderby’s unique clean to verbal melodies. Reuniting in 2013, they’ve been slowly delivering new material, reaching this full-length The Dark Parade at a time when genre blending is more of the norm than ever. Veterans at the craft of fusing metal with funk, r + b, and hip-hop accents, the diversity yields mixed results throughout this eight-track offering.

Switching between an alternative style of lower to mid-register delivery and the rap-style voicing depending on the needs and atmosphere for the song at hand, many will appreciate the hints of influence for Public Enemy on the dynamic “I Am Charlie” which can be quite intense, semi-progressive and thrashy during the instrumental sections. Meanwhile the train/narrative sequence that opens “All Eyes on the Prize” transforms to a weird mix of crossover thrash with electronic nuances, scratching, and numerous gang-like background vocals that has more of a NY/Anthrax flavor than what one would normally expect from the Bay Area. Tasty riffing and lead breaks from Danny White and James Sanguinetti carry the bulk of appeal, especially in some of the longer arrangements for “Dragging for Bodies” and the seven-minute plus circus-oriented rollercoaster title track. The funky and southern angles come out on the closer “Smash Goes the Bottle” – Aaron adding some stunted turntable action while Arthur Liboon fills proper fluid intricacies on the bass on this catchy number that has a bit of Thin Lizzy-ish charm.

The main problem for Mordred in 2021 is taking all these elements and having it flow into a cohesive package consistently song to song. Abilities are sharp, dynamic diversity is on point – but the overall hook to melody ratio measures lower than the standouts on Fool’s Game or the follow-up In This Life. Maybe a case of needing to get your feet wet again before turning out higher quality material on the next effort. 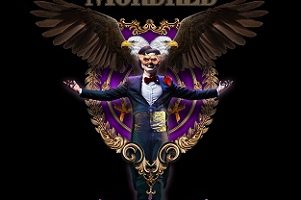