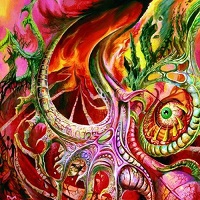 Outside of copying Left Hand Path note-for-note, there probably isn’t a better way to create the vaunted Stockholm death metal sound than having former Entombed mastermind Nicke Andersson produce one’s album. Andersson’s influence on Swedish metal in the early 90’s is tremendous, having written the bulk of Entombed’s first three albums (Left Hand Path, Clandestine, andWolverine Blues), so the man knows a thing or two about creating death metal in this vein. Now, his work with The Hellacopters is entirely another thing, but Morbus Chron did themselves a huge favor by employing Andersson to handleSleepers in the Rift. It is as every bit as “classic” sounding as one would expect.

As a whole, Sleepers in the Rift kicks it via traditional Swedish death metal passages, including brutal thrash runs, like on opener “Through the Gaping Gape (Coughing In A Coffin”) and the Left Hand Path-ready “Red Hook Horror.” To their credit, Morbus Chron are able to spawn some relatively catchy moments, including the bodacious “Dead Body Pile Necrophile,” which not only rhymes, it’s a frenzied stab at loose, sloppy, yet evil-sounding death metal. Plus, when singer Eddie starts to wail, it sounds like he left home without his rabies shot, making him the best thing about the band.

The tail-end of 2011 saw more Swedish death metal-inclined releases than we’d ever like to see again, and because of it, there’s going to be some releases get kicked down a peg. In the case of Morbus Chron, they’re perhaps the most unharnessed of the bunch right now, and on Sleepers In the Rift, they go out of their way to be unrelenting, and unrestrained…probably much to Andersson’s liking.