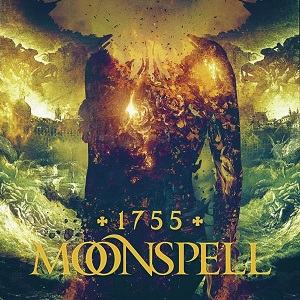 Emboldened, perhaps, by 2015’s rather excellent Extinct, long-running Portuguese dark metal ensemble Moonspell have taken on the rather difficult task of releasing an album sung entirely in their native tongue in the form of 1755. Now, this doesn’t put the band off course the way 1998’s much-debated Sin/Pecado did, but it does, somewhat, slow the momentum gained on Extinct. There’s nothing inherently wrong with an album full of Portuguese-sung songs, but Moonspell is such a vocal-driven band that it makes 1755 not the palatable effort it truly can be.

With all the chatter about Portuguese-sung vocals, it’s therefore necessary to start with vocalist Fernando Ribeiro. Ribeiro, when not rolling out his trademark Gothic Dracula vocals, retains a healthy, if not spirit mid-range rasp. He’s particularly on fire throughout 1755, an album that re-tells the devastating Lisbon earthquake of…1755. Naturally, his grasp of his native language is stellar, but those in search of some of the man’s broad, sweeping, syrupy, deep-throated choruses may have to wait on 1755. They’re not as prominent as they were on Extinct, with cuts like “Abanao” and “Todos os Santos” bordering on extreme.

Moonspell couldn’t write an album without drama or big keyboard flourishes, thus, providing a good portion of these cuts the cinematic angle it requires. Guitarist Ricardo Amorim also deserves a nod or two for his savvy riffing, often combining sub-thrash riffs with brash, elongated melodic constructs. Moonspell deserves full credit for taking on such a complex and daunting project. 1755, though, does not match its predecessor.