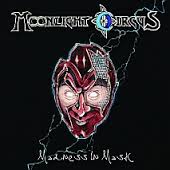 Epic/ power/ progressive metal in Italy has flourished thanks to the international success / impact of Rhapsody / Rhapsody (of Fire) and Labyrinth to a lesser extent. It’s also one of the countries who support American acts like Dream Theater, Fates Warning, and Queensryche to a great degree. Madness in Mask is the second album from Milan quintet Moonlight Circus, with a 13-year gap between record releases (although working on three demos between 2002 and 2005 did stimulate those creative muscles).

Split down the middle between shorter arrangements and broader, expansive material, the 8 tracks musically showcase a wide knowledge of the metal genre: incorporating acoustic guitar textures in the mid-section of the 8:10 “Winter Masquerade” and classical piano with psychedelic textures for the opening parts of the dramatic, swirling “Wind of Solitude,” featuring a strong pitch bending keyboard/ guitar break exchange at 5:19- 6:06 between Daniele Soravia and Paolo Viani.

Overall, Moonlight Circus leans to a more epic metal style, using progressive parts as more of a shape shifting dynamic. Kamelot, Warlord and domestic veterans Black Jester factor into the influence bank, as rhythmically you get a lot of marching/ galloping tempos and then swift, dark chord transitions. Two struggles with full enjoyment include the synthetic drum tone for drummer Salvatore Bonaccorso (the bass hits seem so computer generated) and the warbling, schizophrenic nature to singer Emanuele Cendron’s melodies. The harmonies for “Mountains of Madness” and shrieking within “Gabriel” will induce shudders of disbelief, as he is no Khan or even Geoff Tate during his Queensryche glory years.

I know pockets of people will enjoy this because it’s in line with the essence of heavy metal while not being overtly technical. Madness in Mask could put Moonlight Circus back on the radar screen- even if it’s only a tiny blip at this time.