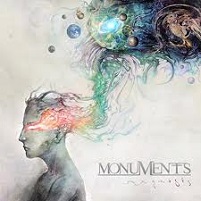 The dearth of djent–related releases in 2012 is a cause for a celebration of sorts. Around this time last year, the style seemed ready to flush the metal scene with a ho-hum cast of soundalikes and rip-offs, threatening to forever soil the good name Meshuggah has worked so hard to achieve. Thankfully, the style has been put at bay and it’s opened the doors for more technically-inclined bands such as the U.K’s Monuments, who on their Gnosisdebut, blend the pulsating djent sound with a progressive metal edge that has some flotation capabilities. Not much, but some.

Make no bones about it – there is a searing undercurrent of all things staccato-related on the nine songs that comprise of Gnosis. The usual low-tuned chugs and stop-start histrionics are covered by fluent solos and the good cop/bad cop vocals of Matt Rose, who is easily the album’s most divisive aspect. Rose (who before joining Monuments, sang in a drum ‘n’ bass band) can do the atypical Kidman roar, as well as grating clean vocals, which at various points (see: “Doxa”) get out of hand.

The rhythmic capabilities of Monuments are the main selling

point, as jams like “Blue Sky Thinking” and “Empty Vessels Make the Most Noise” have an oft-kilter, downward thrust to them that coincidentally, make the band heavier than they should be. Of course, dealing with Rose’s clean vocals is another thing altogether, but it shouldn’t take away from the fact that the Brits on the musical side, are imposing when they want to be.

Practically guaranteed to run with the current wave of neo-tech bands such as Tesseract, Periphery, and The Faceless, Monuments finds a meager amount of wiggle-room between their contemporaries. However, the overriding notion fromGnosis is that once again, clean vocals manage to spoil the broth for “regular” metal folk, thus rendering this one null and void.