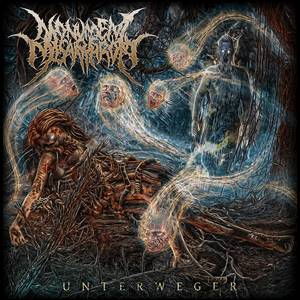 With a debut back in 2014 (Anger Management), it’s been eight years since we have gotten a full-length record from Monument of Misanthropy.  Featuring only George Wilfinger from said release, it’s not surprising that some elements have changed – even if the name of the game is overwhelming brutality.  Unterweger is a concept album about the serial killer Jack Unterweger and it solidly improves upon their debut.

You’ll certainly get hints of bands like Suffocation, Hate Eternal, and Morbid Angel (of which there’s a cover at the end of the record), but what seems to stand out is how they have attempted to make Unterweger into more of an experience instead of blurring together tracks.  Sure, there are a few brief interludes at times, but even within the songs themselves there are some elements like this.  “The Legacy of a Malignant Monster” casts eerie atmosphere alongside copious amounts of blastbeats, frenzied riffing, and monstrous vocals.  It makes it flow more, and avoids that ‘blur’ that often times occurs with such a brutal releases.  Some shorter songs, like “Tales from the Vienna Woods,” bring forward that uncompromising brutality and sheer energetic force, but even some of the steamrollers do what they can do to stand out.  Much is accomplished by the varied roars, screams, et al from Wilfinger (as well as guests from Aborted and Benighted), but the riffing keeps that technical edge to it where they can still press ahead with bludgeoning power and speed, but there’s also groovy melodies to enjoy (“Miami Vice – Miami Gold”).

Unterweger is an exhilarating listen, as these more brutal than thou releases should be.  But Monument of Misanthropy deserve a look because of the extra bits they provide, such as an entire concept story to fit their deranged sound and put a smidge of ambience to it as well.  A chunky, blistering slab of brutality for death metal fans to enjoy.