Probably the biggest selling point for Monument of Misanthropy is that of drummer Romain Goulon (Necrophagist).  Well, that and the wicked looking creature on the cover!  Rounding out the remainder of the band is George ‘Misanthrope’ Wilfinger (Raising the Veil, Disfigured Divinity) on vocals and Jean Pierre Battesti doubling up on guitars and bass.  Considering the album is called Anger Mismanagement, it would be remiss not to mention that it seems that these three guys are actually pretty good at channeling their anger into their music.

Monument of Misanthropy is brutal death metal the way it’s served best: fast, furious, and completely unrelenting in its aggression.  There’s a small taste of an old-school vibe thrown in with some of the riffs (and the thick production of them), but it’s to be no cause for alarm if you’ve had enough of that particular sound.  Some of the moments are so relentless that it almost feels like they are channeling some grindcore (as well as some of the higher register vocals) on songs like “Vegan Homicide.” There are no real “slams” on the disc either, but do expect some downright heavy grooves when they do finally decide to dial things down (“Retarded Phrase Mongers”).  If you enjoy the fury provided by bands like Hate Eternal, you’ll probably get a real kick out of Anger Mismanagement.

That being said, the usual “but” does apply to Monument of Misanthropy’s album.  When brutality is cranked to the extreme, one does need to expect the album to have a severe lack of memorability.  Anger Mismanagement has a few good, solid hooks (usually when they decide to slow down for a few seconds) but many of the songs are a blur after listening.  Thankfully, this is diluted somewhat by the short 30-minute playtime that never seems overbearing.  There is also a solid cover of Kreator’s “Flag of Hate” to bring things to a close on a positive note.  All in all, expect a half hour onslaught of brutality, and if you can dig it, enjoy! 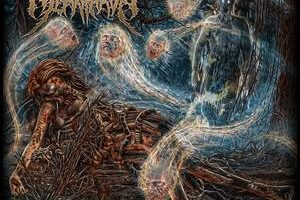