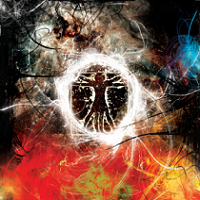 One of those bands that are under the radar, but have no business being as such, the U.K.’s Monsterworks are making inroads at becoming one of cerebral metal’s more interesting bands. And by “cerebral,” we don’t necessarily mean technical or extravagant, but, smart, heady, and able to pull from all the right influences without sounding like some second-rate cross. Album of Man is the long-in-the-works full-length comprised of the band’s previous three EPs, situating itself as every bit as involved of a listen as suggested.

Operating on a conceptual level that is on par with Nevermore during their ascent, as well as Cynic, Album of Man’s overriding tone is that of dreariness and cold. The sounds aren’t necessarily in that vein, yet the album’s concept dealing with the rise, fall, and myriad of downfalls that come with organized religion cast a cloudy hue. Either way, the band’s multi-tiered approach to progressive metal allows them to jump all over the place, from thrash (“It’s Alive”) to traditional (“It’s All A Lie”) to the extreme smatterings of “Harden to Art.” You’re not going to get the same twice with Monsterworks, but the obvious thread exists.

Clearly designed for the open-minded and adventurous, Album of Man should help Monsterworks get some pecks from larger labels, some of which shouldn’t have much trouble trying to sell the band’s high-fidelity, high-brain concepts to the progressive throng. Plus, the method of issuing three EPs prior to a full-length was also a bold move, something more bands should take note of.  Nicely done.