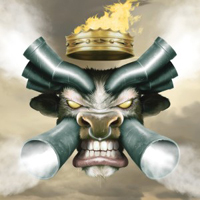 ‘Ole Dave Wyndorf is back, sans the drugs (apparently), which in some odd, twisted way, has resulted in Monster Magnet popping out their best album in eons. Yeah, eons, which means that could stretch into the Dopes To Infinity days. Mastermind is ragged and raw, with Wyndorf dropping his usual magic poetry about chicks, comic books, and nipple-biting. This thing will charm the pants off of you, which is probably Wyndorf’s intention anyway.

Whereas 2004’s Monolithic, Baby! and 2007’s 4-Way Diablo were lazy and uninspired, Mastermind sounds like the band actually means it this time, even on the stoned-out opener “Hallucination Bomb” and “Dig That Hole.” “Bored With Sorcery” (love the title) bounces its way like a would-be arena rock gem; same for “Gods and Punks,” which has some devilishly-wry lyrics from Wyndorf, who like most Monster Magnet albums, is front and center with some of the best prose in town. The man still knows how to spit out a one-liner.

Well-sequenced Mastermind is, with a clever interlude in the form of “The Titan Who Cried Like a Baby” properly setting up the Superjudge-like title track. “100 Million Miles” follows in the pattern set by “Bored With Sorcery,” while the dreary “Time Machine” does its job to temper the playfulness of the album. In fact, those waiting for the bottom to fall out from under MM, should keep waiting – it never happens, surprisingly.

Experts on pure rock we are not, but to these ears, Mastermind could very well be the best rock record of the year. There’s no real flaws to it – Wyndorf and his cohorts are very much on top of their game, which means that the next album will probably be a letdown. Such is the pattern for Monster Magnet, but for now, let’s roll with Mastermind.