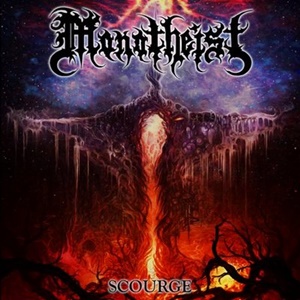 Progressive death metal from Florida – which shouldn’t be surprising given the long legacy of acts from that state such as Death, Morbid Angel, and Atheist among others. Monotheist call this state home, and its been a slow climb in terms of discography since their 2004 beginnings. They’ve released a debut album Unforsaken in 2007 and an EP follow-up Genesis of Perdition in 2013, setting the stage for this second full-length Scourge. In the end, it’s all about assembling musical talent into a cohesive format that captures attention enough for consistent return engagement – and there’s plenty to devour in the diverse attack the quintet engages within through these eight tracks.

The record appears to be split between the shorter and longer arrangements down the middle – the front half hitting upon concise (for Monotheist) offerings such as “The Grey King” and 1:53 violin-driven instrumental “Mark of the Beast Pt.1 – The Image”, while the final four songs showcase lengthier, more involved material that clocks in at ten-minutes on average. Drummer Cooper Bates astounds with his groove to blast tradeoffs, going from psychotic madness to restrained swing passages to make “Mark of the Beast Pt. 2- Scion of Darkness” a beast of a cut, the progressive, forceful riff tidal wave and deep growls and screams cascading like a tsunami unrelenting. Many times the lead work or transitions provides that jazzy/ambient calmness to hook the listener into the next killer technical tempo/rhythm combination – where Death meets Immolation, or Opeth can careen into Suffocation while Cynic lurks in the shadows.

Never stuck in one specific speed, these gentlemen understand the need for clean build ups or atmospheric textures that give the listener more time to process the next forthcoming blitzkrieg. Check out the introduction of “Infinite Wisdom”, where Michael Moore and Tyler McDaniel provide a circular, almost hypnotic/cultural refrain that goes off into Testament/neoclassical glory – before ramping up the electric action as one would not expect a 10:12 instrumental to succeed, yet it does. The slower, guitar harmonies over haunting background vocals give chase to another progressive death barrage on “Desolate it Mourns Before Me”, injecting a few bass breaks from Jose Figueroa plus more impressive measured growls from JJ Polachek – the Latin/samba percussion section another winning touch. You often worry that an hour-long effort will not sustain long-term interest – Monotheist lay those fears to rest, successful because of the diversity and proper placement of these left-field influences while maintaining a cohesive (and coherent) style.

Tack on guest contributions from Christian Alvestam (Solution .45, ex-Scar Symmetry) and Bobby Koelble (ex-Death) and you can understand Scourge is long worth the wait.