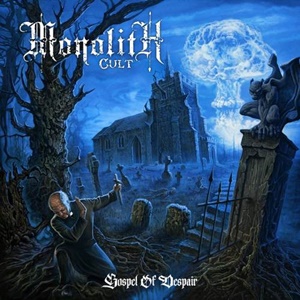 Arriving to save your soul from this life of hell, Monolith Cult add another epic doom metal record that transcends any space/time continuum with their second album Gospel of Despair. The quartet contains a pedigree of musicians that at one point or another spent time with Solstice (in the case of bassist Izak Gloom still a current player, guitarist Lee Grind an early 90’s member) – plus the UK bleakness and atmosphere aids the gloomy despair into an aural ecstasy aesthetic that pervades these six tracks (“Chothia in Memorium” midway through serving as a 46 second guitar-oriented breather of sorts as the seventh cut).

Striding valiantly into that mid-tempo march to slower, lurking crawl – the four-piece have a proper balance between those burly, groovy-styled riffs and the swirling, larger than life harmony/hook passages that just make doom followers sway forward and back. “Sympathy for the Living” allows Wayne Hustler and Lee to team up in crushing fashion, often injecting some Grand Magus power against the conventional Solitude Aeturnus/Black Sabbath style darkness – including some blistering drum passages during the latter half transitions. The band never remain in one specific tempo or riff pattern – showcasing the multi-faceted appeal of epic doom even in as a slower sub-genre, as “Disconnection Syndrome” has that battering ram approach to the swinging, low-end guitar/bass combinations while “Complicit in Your Own Abuse” doles out that right lurching push and pull aspect that keeps heads bobbing, fists flying, and drains any frustrations away from the body and soul.

Bry Outlaw (what a cool name for a singer) conveys everything you want in an epic doom vocalist and so much more: passion, emotional magnitude, chill-inducing higher note capacity while also reaching down for that low, somber melody if called for. It’s one of those voices that synthesizes Dio, Whitesnake, and Deep Purple for three references, as the title track and the mind-numbing closer “Death Means Nothing” feature two of his most mesmerizing performances on the record. While most of the songs are six to eight-minutes plus, the record comes in at a tidy 43-minutes and change, a perfect amount of material to process and enjoy. To those who believe there isn’t anything new in this genre that can stack up well against the forefathers, one only need to listen to Sorcerer and this band to hear that epic doom is very much alive and well for 2017 and beyond.