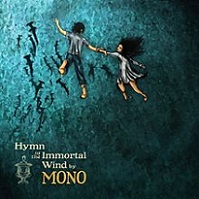 The first thing you’ll notice about the latest Mono album, their fifth, is the packaging – the booklet and artwork tying into the story of the music, giving a further dimension to this stunning piece of work.

Once you move beyond this and get down to the core, the music, you’ll find all sorts of further wonders. For a band which once shared space with Pelican on a split release, Mono are less about the heavy, heavy and more about the soft and pure. Not that we’re digging at Pelican in the slightest, but Mono take a totally different path. The destination matters not so much, it’s the whole emotional experience you have along the way. The story which unfolds as you progress.

As a whole Hymn To The Immortal Wind is more in line with soundtrack music, to say Spirited Away, than most modern post-metal. It’s a beautifully sweet record where there are few moments that stand out of the whole as being above and beyond each other. “Burial At Sea” builds to a swirling, conclusion it slips gently into “Silent Flight, Sleeping Dawn” and its lulling woodwind introduction, soft piano entrance and underlying stings. It’s these moments you take away afterwards, the classical music

moments. After I first listened to this I couldn’t remember any of the rocking or metal-ish passages. I’d have told you it all remained basked in the low to mid regions, but the sea does get stormy… don’t worry about that. It’s like an expression of nature. There are the hard moments of winter, but you remember the beauty of spring better. Well you do the way Mono present it anyway.

It’s a very moving and sad record though Hymn To The Immortal Wind. There seems to be a lot of heartache behind it, rooted in its very core and that remembrance of sorrow is conveyed precisely by both the orchestration and words in the accompanying booklet. The passages where drums, guitar

and bass drop out and the classical instruments take over are easily the most moving, especially the quite smile at the end of ‘Silent Flight, Sleeping Dawn.”

The balance between these two types of normally conflicting instrumentation is worked in perfect harmony throughout. This is an absolutely perfect album. The flawless score at the top is not an error. It was hovering just under the 10 for a long time, but having listened to it over and over it’s shown itself to be without any misguided steps. The journey these songs takes you on is an emotional experience, with final song

“Everlasting Light” almost enough to make you cry. If you’ve ever found solace and hope in Jesu and Red Sparrowes, then this is one for you.

Hymn To The Immortal Wind will tug at your heartstrings and make you love it for doing so.