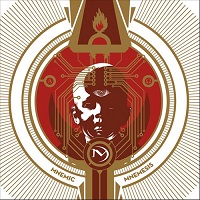 montage of melodic death metal and progressive parts with elements of industrial, thrash and groove thrown in for good measure. Gaining the respect of a multitude of heavy acts (including opening for Metallica in Europe), the style they deliver reminds me more of an amalgam of Fear Factory with its industrial/electronic atmosphere against Soilwork/Meshuggah-type aggressive/clean tradeoffs in the riffing and vocal departments.

Occasionally veering into down tuned doomier musical terrain for “Pattern Platform” which should easily get every pit swarming, the vocals of Guillaume Bideau are ethereal and hypnotic during the clean

sections and psychotically sadistic during the growling verse parts. His affinity for assimilating Burton C. Bell during the opening verses of “There’s No Tomorrow” is uncanny, giving his all during the 2:43-2:53 trailing verse note holding.

The pacing for the most part on Mnemesis gravitates into a mid-tempo groove stance, as drummer Brian Larsen and bassist Simone Bertozzi plunge head first into fierce stomp worthy material such as opener “Transcend” with its bob-and-weave timing shifts and the riff-tastic “Junkies on the Storm. Guitarist/ keyboardist Mircea Gabriel Eftemie often paints a subtle tranquil portrait with his key layering- only to deliver the knock out distortion blow along with fellow guitarist Victor-Ray Salomonsen such as the one on standout “Haven At the End Of the World.”

With 10 songs and 44 minutes Mnemic prove that you can have commercial aspects to your music while still being aggressive and uncompromising in terms of delivery. Long-time producer Tue Madsen captures the quintet’s sound with that delicate balance between sheer sonic overload and dynamic intensity. Addictive and appealing to a multitude of heavy music fans, Mnemesis doesn’t disappoint.