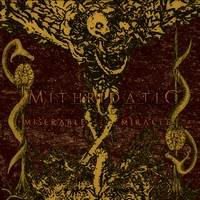 If you name your band after a series of wars in the 1st century B.C. you better be ready to bring some pretty ferocious stuff. French metallers Mithridatic do just that, and with a churning, almost sickening ambience. Though it is not a flawless attack. Miserable Miracle is not an album for the casual listener. It demands your full attention, yet gives you few instant rewards. This is in part due to the skillmanship of each band member – drummer Kevin Paradis (Svart Crown, Benighted) blasts away and has some killer fills and parts in every song, calling out to the listener and stealing the attention from the rest of the band.

Enter vocalist Guitou. His wide range of screams, growl and Abbath-like rasps forces the listener back from the percussive abyss to focus once more on the overall composition. Coupled with guitarists Sanchez and Brosse he weaves some rather vomitous black magic. Unfortunately, the bass guitar is almost lost in the mix, much due to the massive wall of guitars and drums that permeate the album. A clearer bass guitar sound would have been better to show off what I assume are some amazing bass lines by Remolow.

Halfway through the barrage that is Miserable Miracle I begin to wish for a slight breather. And while ”Funambule Pénitent” is indeed slower to begin with, it quickly picks up the pace and face-melting aggression once more. Guitou also pulls of some strange screamy vocals that the album would have fared better without. ”Oxydized Trigger Sabotage” could also have functioned as a breather track but being placed almost at the end it lowers the intensity too late. Spoken parts and the aforementioned comically screamed vocals makes this track lower the impact of the entire album. The attempt to build some creeping ambience here just doesn’t work. Instead the effect is rather the opposite. A pity.

Still, Mithridatic delivers a fine debut effort, albeit somewhat repetitive in it’s ferocity and with parts that bring down the whole. Miserable Miracle is nevertheless an album that deserves to be checked out!